Carel  Joseph Anton  Begeer (1883 – 1956), medallist, he succeeded his father and uncle at the Utrechts factory of silverworks C.J. Begeer, later on he was director of the united company Royal Van Kempen and Begeer

Johannes Adriaansz Bemme (1775-1841), Rotterdam, medallist, he made portraits of the royal family. Best known as engraver, died in The Hague.

Théodor Victor van Berckel (1739-1808), Master of the Mint in Brussels and Vienna. Born in Bois-le-Duc, studied in Kleef (Germany) under J.C. Manné, In 1776 he was appointed ‘Graveur Géneral”of the Austrian-Dutch Mint in Brussels. Between 1798 and 1903 he was head engraver in Vienna. Died in Bois-le-Duc.

Jac. J. van Goor (1874-1956), started on the age of 15 at the firm Begeer. Later on he was educated at the Royal Drawing Academy in Hanau (Germany). He produces many occasionale medals like the Landsteinermedal of the Red Cross.

Christiaan Johannes van der Hoef (1875–1956), sculptor, medallist, engraver and ceramist. Active as a free-lancer, especially for the Royal Begeer in Voorschoten and for the Dutch Mint in Utrecht.

Martinus Holtzhey (1697-1764) born in Ulm (Germany), he establised oneself in 1722 in Amsterdam. He became on July 15th 1722 a member of the Lutheran Congregation of Amsterdam, in 1725 he became a citizen of Amsterdam. He started his career as medallist in 1729. It is also the year of his address medal with his own image, advertising himself as a medallist. In 1749 het was appointed Master of the Guelders Mint in Harderwijk (till1753) and  in 1753 Master of the Zealand Mint in Middelburg. He married in 1725 Judith Cok (1694-1749). Two sons and three daughters were born out of this marriage. The two sons followed of the track of father Holtzhey. Youngest son Martinus Jr continued to be Master of the Mint of Zealand until his death in. After the departure from Amsterdam to Harderwijk of father Holtzhey the oldest son Johan Georg took over the Amsterdam medal factory. Father Holtzhey deceased November the fist1764.

Johan George Holtzhey (1726-1808) Master of the Mint of Utrecht 1771-1777. He was married tot Cornelia Hester Slob (1748-1776). After her death Johan moved to Amsterdam again. On Augustus the first1784 he married Engelina Hofman (-1802). After a long illness Johan died without children. He was nursed not only by employees of his own firm but also by the engraver David van der Kellen

Father and son Holtzhey issued hundreds of medals in commission. They wer also known by issuing the so called ‘Spekulationsmedaillen’. Famous is the catalogue from all their products between 1729 and 1754. At first their shop was situated at the de Prinsengracht, after 1736 however at the Herengracht. Later on also in the Kalverstraat. They had sale-rooms in several Dutch places.

David van der Kellen Sr (1764 – 1825) worked since 1799  at the firm Holtzhey. He was just like the Holtzhey’s a member of the Lutheran church. He worked at the Mint of Utrecht since 1806.  He received in 1874 as chief engraver of the Mint his own medal dedicated to 54 years loyal service.

Carel Frederik Konsé (1736 – 1786) , in 1758 he was registrated as a painter in the guils of St.Luke. In 1763 his children were baptized in the Lutheran religion. (In 1729 Johan Christoffel Conse was already an inhabitant of Amsterdam). Ivory- en paarlemoerworker.

Johannes Michiel Lageman (1725- 1809), allegory was to be seen in all his work. (Hendrik Lageman was a pupil of Karel Konse, who had a shop in gold, silver and medals. Citizen of Amsterdam, handelaar in goud en zilver, medailleur.

Maarten L. Pauw (1912-1966), director of the Silveracademy of Schoonhoven. Medallist and sculptor.

Nicolaas van Swinderen (November 15th 1705 – July 3 1760), lives on the Lutheran Burgwal, The Hague, in 1737 he made the medal of the Lutheran Orphanage, did a lot of work for stadtholder William IV. 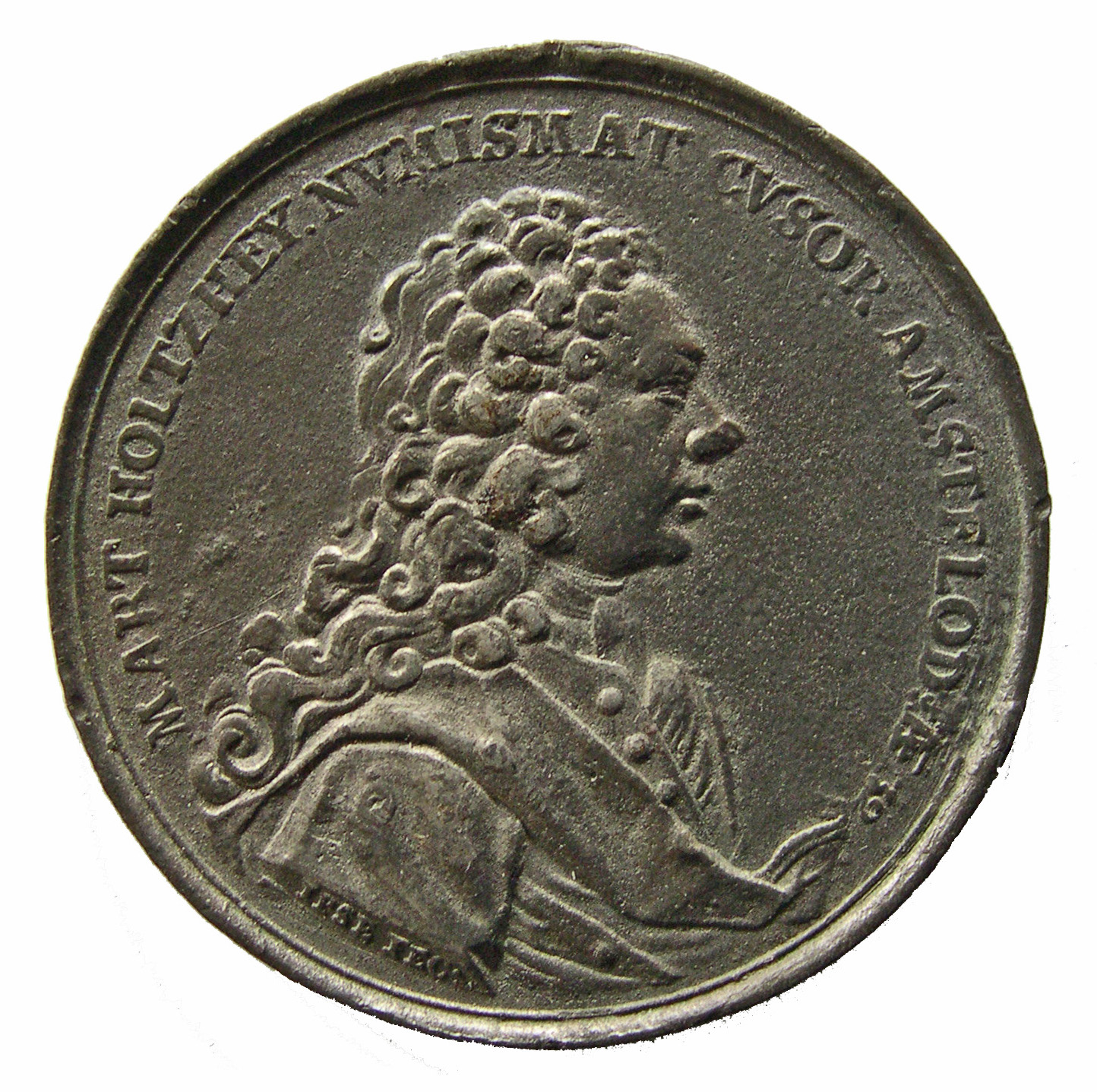